July Nectar Flow – It seems like the main nectar flow has started.  A week ago the hives seemed to be going through the dreaded ‘June gap’ and had consumed a bit of their spring stores.  As I went down to the apiary to do the weekly inspections, I was very much surprised by how much honey the bees had managed to collect since my last visit about a week ago.  A couple of the hives have already filled up 3 supers and it looks like they have a long way still to go.  The huge number of lime trees around the apiary is sure to keep the bees busy for the next few weeks.

This time last year (even though it was one of the best seasons for a while) the colonies did not have as much honey in the supers as they do this year.  I did re-queen a few of the colonies so it might be thanks to the younger queens, but whatever the reason, we are loving this years spring/summer.

Luckily I had my yellow marker in my toolbox and when I found our beautiful queen, I crowned her with this years yellow dot. 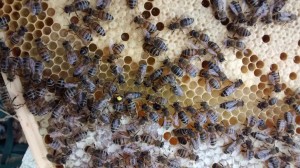 Being quite positively surprised by the amount of honey already in the hives, I photographed a full frame of honey all capped and ready for extraction: 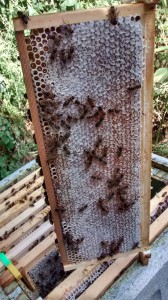 Last year I tried my hand at allowing the bees to build their own natural comb on a few frames in the honey supers so I could use it for cut comb.  From those few frames, I found that the comb was even strong enough to spin out in my extractor without causing damage and this year I decided to roll it out on all my hives.  Having applied a thin layer of beeswax to the top bars as a guide, I have found that the bees have done an amazing job of building out the comb pretty straight and really strong.  I’m quite happy with the result which can be seen below: 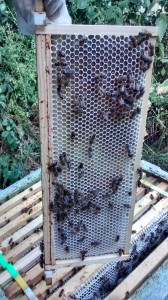 I’m hoping to use as little foundation as possible to keep the colonies as natural as I can and to have as few impurities in the hives as possible,I’m not so keep on the potential for traces of harmful substances which can be found in foundation, especially since wax is so good at absorbing chemicals.

I love looking at newly created honeycomb, its so perfect and so white before it takes on the colour of the pollen